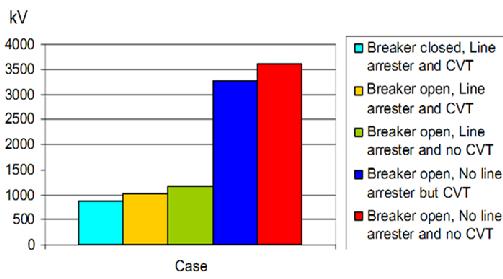 Isolation coordination Atmospheric surges The present article of review of the Norma IEC 60071-1 and IEC 60071-2, aims to be a tool for determining tensions supported of coordination of overvoltages Front fast using the method Simplified described in Annex F of the normative It is important to mention that the estimation of the ray current […]

The present article of review of the Norma IEC 60071-1 and IEC 60071-2, aims to be a tool for determining tensions supported of coordination of overvoltages Front fast using the method Simplified described in Annex F of the normative

It is important to mention that the estimation of the ray current or the amplitude wave’s front will be subject to a wide range of variables as a ceramic level of the geographical place in the which is located the project, resistivity of the Land, Return Periods, Polarity Positive or negative lightning, among others.

In turn, aspects such as the level Ceráunico are variable statistics dependent on the precision of the monitoring plants environmental and a good Management of the data history.

Therefore, the norm raises a method Simplified for the estimation of the overvoltages due to lightning, which in general terms assumes that the Line entry bays and the main electrical equipment of the substation will be protected by surge and lightning dischargers, properly selected low The IEC 60099-4 standard.

Before performing the calculation of the amplitude of the representative voltage of the beam Some hypotheses should be assumed as it should be:

(URP) Amplitude of the representative voltage of the ray (KV).

(A) Lightning behavior factor Depending on the type of transmission line.

(L) Distance of separation from the lightning rod and the equipment to be protected (M).

(Lt) Portion of the airline that has A rate of defects equal to the rate of established return (M).

(Rkm) Annual defects rate of the corresponding transmission line to the first kilometer of line from of the substation, (1/100 km / year).

Incorporating the expression F.18 It has:

Obtaining the supported tension of Coordination for the ray impulse:

La Portion of the airline whose rate Default is equal to the Acceptable Established failure rate.

Factor A for different types of lines

Below is the elements that must be taken into account to determine the distance of separation From the resort to the protected equipment (L). 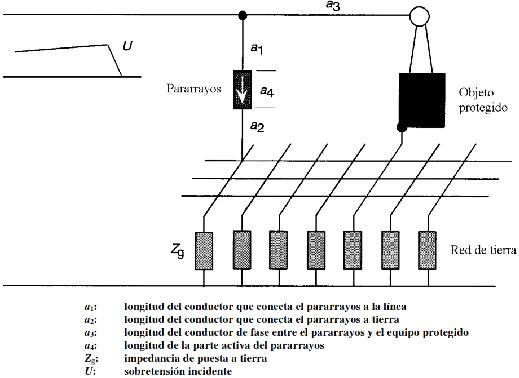 It is pertinent to make a comparison of the calculation of the protection distance of a lightning lights made by the simplified method with respect to the method of Simulation with software. 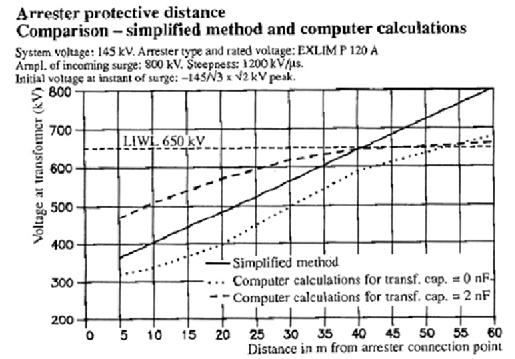 According to the graph, with the method Simplified more values are obtained conservatives, being able to overcome the bearable tension for atmospheric discharge at 40 meters from Distance from the resort to the protected equipment.

However, the simulation method By software usually requires introducing parameters such as amplitude of the current of the atmospheric discharge that will be subject to studies Middle environmental statisticians or reports of similar characteristics projects.It is common to find amplitudes atmospheric discharge current of the order of 150 kA, 200 kA and 250 kA, However, the choice of one or the other value will depend on the information available for each project and finally of the proper selection of the engineer Electric design, since each parameter will offer different results.

Also, the behavior of the front of wave once it is entered the Substation will depend on aspects such as the contact state of the Power switches (open / open Closed), the capacitance of electrical equipment, the type of conductors Electric bar and grounding of the substation among others.

Below you can see the Wave behavior Atmospheric when the switch is in an open position: 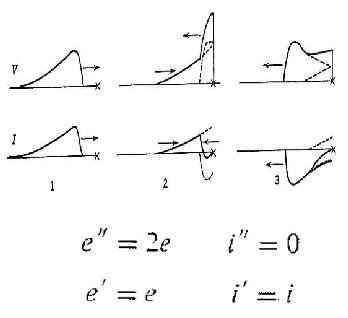 As can be seen for the curve of tension there is a reflection of the wave by having a discontinuity that produces an overlap and elevation tensile.

On the other hand, the electrical equipment of the substation will also play an important role regarding attenuation Wave front as can be seen below:

In the graph you have the results of The voltage measured in the power switch for a wave amplitude of 2000 kV, as can be observed lowest level of overvoltage happens In the case of closed switch, Bay line with lightning and transformer capacitive stress, as long as, Situation more criticism happens with open switch and line bay without lightning or transformers of capacitive tension.

Finally, it is important to indicate that for the range I (1 kv & lt; um≤ 245 kV) Standard supported tensions include short-term supported voltage at frequency Industrial and tension supported at ray impulse, therefore, the proper selection by the designer of the supported tensions and Normalized for the ray impulse They will grant reliability to electrical installations by guaranteeing electrical distances phase-earth and phase-phase Internal and external isolation.