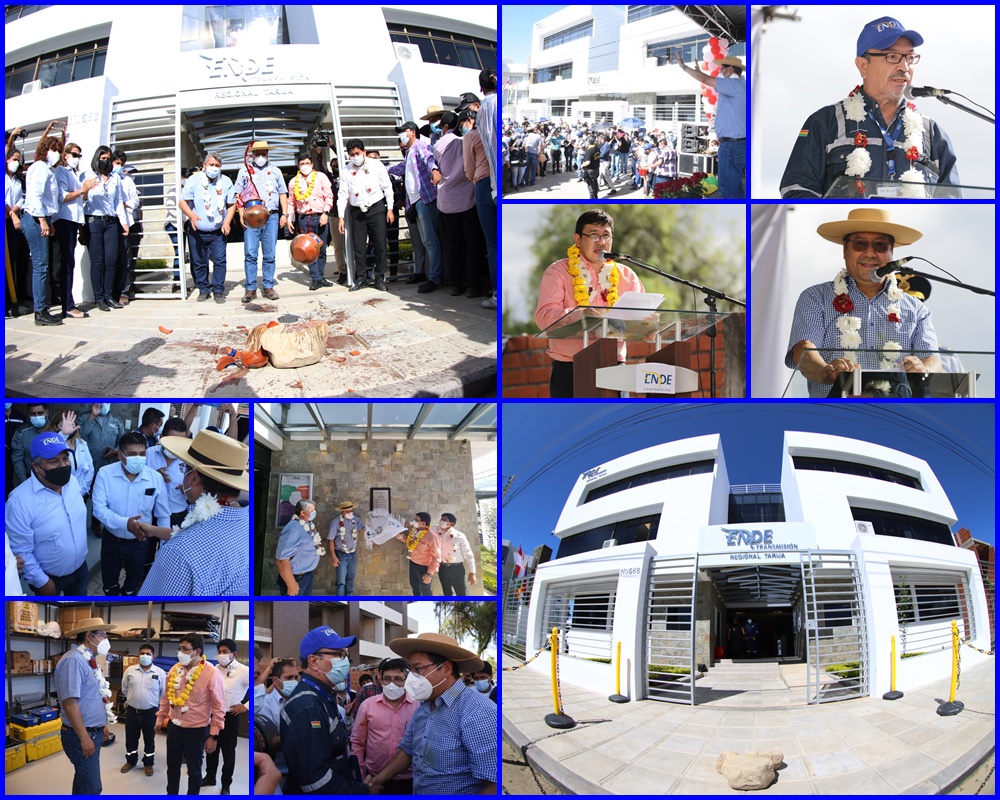 UNICOM/ENDE CORPORACIÓN: PRESIDENT ARCE OPENS A NEW ENDE TRANSMISSION BUILDING IN TARIJA UCOM-MHE-ENDE-12-04-2022.- With the presence of President Luis Arce Catacora, the Minister of Hydrocarbons and energies, Franklin Molina Ortiz, the president of the national company of Electricity (Ende Corp.), Manuel Valle and authorities of the electricity sector, opened on Tuesday The Tarija de Ende […]

UCOM-MHE-ENDE-12-04-2022.- With the presence of President Luis Arce Catacora, the Minister of Hydrocarbons and energies, Franklin Molina Ortiz, the president of the national company of Electricity (Ende Corp.), Manuel Valle and authorities of the electricity sector, opened on Tuesday The Tarija de Ende Transmisión building, which demanded an investment of Bs8,776,838.73.

On the occasion, President Luis Arce said that “the interconnected we are doing since Here at La Angostura to get to Bermejo, according to our technicians, we will be concluding Works in July of this year “referring to the tasks that have ENDE TRANSMISIÓN in the department of Tarija.

For his part, Minister Molina declared: “A few days ago our presidents of Argentina and from Bolivia, President Lucho Arce together with our co -fellow Argentine president Alberto Fernández, expressed this will to integrate as a country and that integration does not It is only gas, it is not only the brotherhood that our Bolivian people have with Argentina, but also electrical integration ”in allusion to the construction of the transmission line Electric Juana Azurduy, who will interconnect our country with Argentina.He at the same time emphasized: “We are aware that the population as a whole needs a quality service and not a Poor service such as the one that has now been provided in the department of Tarija ”.

The project is intended to facilitate operation and maintenance activities, as well as have adequate administration of high voltage lines and their corresponding substations associated with each project that were built and built in the department of Tarija.

The construction of this new building allows you to attend the following high voltage lines: line 230 kV Yaguacua – Tarija, all lines in 230 kV and substations that comprise the ring Energy of the South (Tarija, Carreras, Torrehuayco, Lítio, Uyuni, Punutuma), Monteagudo Line – Camiri 115 kV, Tupiza Line – Villazón 69 KV (all of them currently in operation).

The building will house the staff that will attend the projects that are currently under construction, such as: lines in 115 kv tarija – Angostura and Angostura – Bermejo, and interconnection Bolivia – Argentina 132 kV.This infrastructure will also allow to attend in a timely manner and adequate the operation and maintenance of transmission lines and high power substations Tarija system transmission voltage in the national interconnected system (lines and Tarija, Villa Abaroa and Tablada substations), as well as the new line in 69 kV Yaguacua – Caraparí, to improve reliability in the transport of electricity in that department.

For his part, the executive president of Ende Corporation, Manuel Valle Vargas declared: “Tarija is the southern door of regional energy integration, from this department we will begin a new era In the economic history of our country.From here we will build new pages for history From our country, from here, working with energy we are going forward. ” The 3 -storey building was built on an area of 2,115 square meters and consists of offices for administrative and technical (permanent and temporal) staff, meetings and training, transmission line workshops and electrical substations, green areas, parking lots and gym, which will complement everyday work activities with sport and occupational health.

According to energy efficiency policies, the building has a system of LED type lighting whose main characteristics are: adequate lighting levels and low consumption, compared to other conventional lighting systems (fluorescent, incandescent).Also, the building has an automation system that integrates video surveillance, implemented to mainly preserve the safety of the facilities, as well as an adequate sound system for multiple use environments (meeting rooms, training, etc.).