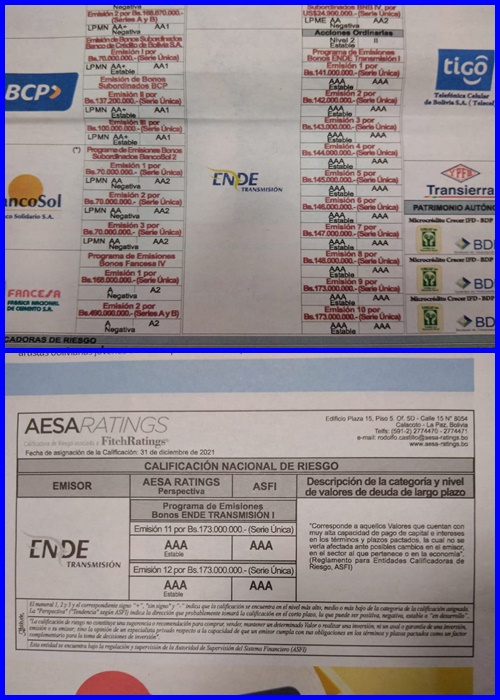 Unicom/Ende Transmisión: Ende Transmisión Gets Maximum AAA rating (Triple A) in Risk Rating in Bolivia AESA RATINGS, risk rating associated with Fitch Ratings, and which is one of the four risk ratingrs operating in our country, announced on January 5 and 6, in publications in the page seven, the list of “Risk ratings in Bolivia […]

AESA RATINGS, risk rating associated with Fitch Ratings, and which is one of the four risk ratingrs operating in our country, announced on January 5 and 6, in publications in the page seven, the list of “Risk ratings in Bolivia “, in which he has participated with information as of September 30, 2021.

Risk ratingrs operate in the securities subsystem, together with stock market agencies, safis, investment funds, therefore they are supervised by ASFI.The other three financial subsystems are: a) Financial intermediation, consisting of banks, savings and credit cooperatives, housing financial institutions (former mutual) and financial institutions for development (former financial NGOs);b) the insurance, made up of insurance and reinsurance companies;and c) that of the Integral Pension System, made up of the two pension fund managers.

In this publication AESA RATINGS shows the nearly 100 issuing companies that were rated by this company, with grades that fluctuate between AAA (which correspond to values that have a very high capital payment capacity and interests in terms and agreed termsand B3 (corresponding to values that have a minimum capital payment capacity and interest).

Most of the issuing companies are financial intermediation entities, the stock market and the insurance subsystem that issue promissory notes, long-term banking bonuses, subordinate bonds and securitization values. The most striking of this note of AESA RATings is that of the dozen companies and public institutions that issued, only transmission, which since 2019 has issued and placed Bs. 1,208 million, in 10 emissions, has obtained at all the maximumAAA rating (Triple A).

Among the almost 100 entities and companies rated by AESA Ratings only 6 banks and 4 investment funds obtained the AAA rating (Triple A).